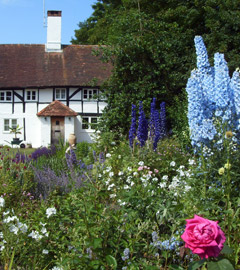 The object of this project was to create a large, plentiful flower border giving a continuous show of colour throughout the year, including good winter structure and interest and at the same time providing support for wildlife, particularly honey bees.

A selection of old-fashioned, repeat-flowering roses were interspersed with carefully-chosen other perennials and structural shrubs, providing a continuation of colour, perfume and texture for month after month, particularly in its second season.

Plants which are attractive to honey bees were integrated into the scheme, such as thyme, mallow, marjoram, rosemary and sarcococca (for winter food resources). Grasses were also incorporated with the perennials to provide cover and protection for wildlife. This was appreciated by a host of toads and frogs, even a baby grass snake! 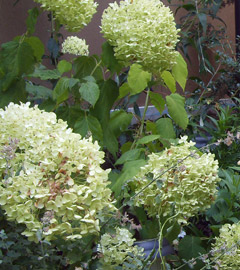 Tired beds were resurrected to brighten up the drive-way entrance of this Hampshire house.

A simple scheme was used, providing year-round interest and a sense of continuity as the borders ran around the side of the house aswell as the front.

Strong evergreen structures were used such as Winter-flowering Viburnum Tinus, interspersed with repeated perennials such as Penstemons, Hostas, Catmint and Pinks, amongst individual show-stoppers such as Hydrangea ‘Annabelle’.

A Cottage Garden in Herefordshire

A range of plants was used to complement the rural surroundings of this country cottage in Herefordshire.

A wide-ranging mixture of intermingling perennials and shrubs were used to give a feel of classic cottage garden planting. This included roses, geraniums, hollyhocks, violas, daisies, columbines and lupins. Annuals were also used such as poppies, sweet-peas and love-in-the-mist to give extra interest, body and colour.

Climbing roses were used to adorn the walls of the house and sheds, interspersed with clematis.

A Herb and Vegetable Garden for a Terraced House in Portsmouth 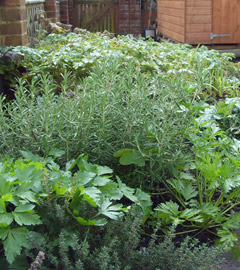 Classic Perennial Herbs such as Sage, Rosemary and Thyme that last through the years were interspersed with annuals such as Parsley, Basil and Coriander and vegetables, such as squashes, lettuce, carrots and courgettes – all for use right outside the kitchen! 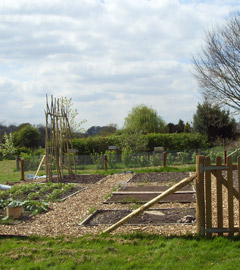 This specially constructed vegetable garden in Hampshire was planted with the aim to provide a continuous crop of vegetables and fruit throughout the seasons.

Fruits included blackcurrants, redcurrants, gooseberries, summer and autumn raspberries, strawberries and rhubarb. Damsons, plums, greengages and pears were trained against the trellis-work in fans or espaliers. Sweetpeas, roses, clematis and runner beans were grown up other parts of the trellis.

One bed was given to an assortment of dahlias and chrysanthemums for cut flowers. Mixed among the vegetables, for an extra bit of colour and companion planting, were other flowers such as nasturtiums, marigolds, cosmos and salvias.

A White Rose Garden, Inspired by Mottisfont Abbey in Hampshire

For this rose garden, 4 symmetrical beds were planted in a paved area to tie in with a beautiful greenhouse. A white theme was desired, and the planting took its inspiration from the exquisite walled garden at Mottisfont Abbey, where old varieties of roses are combined lavishly with other graceful perennials.

A selection of white and creamy white roses were chosen from Peter Beales Roses, all with wonderful scent and repeat flowering. These were underplanted with perennials to complement and give body, such as geraniums, dianthus, violas, erigeron, silver-leaved stachys and purple sage. Other taller plants were also used to give extra impetus, such as lupins and white bergamot. 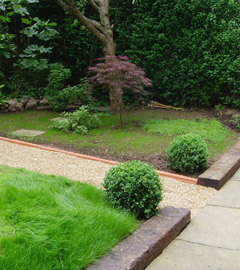 The owners of this London house wanted to smarten up their back garden before putting it on the market.

A quick, simple and cost-effective way to do this was to concentrate on the derelict and ugly pathway focal to the whole garden. By renovating this area, the whole garden and lawn would be enhanced.

The path was re-done with fresh gravel and brick rope-edging to give a smart look. Box balls were planted symmetrically to give some elegance and extra structure. Further railway sleepers were added to tie in with the rest of the front edging.

A Formal Box Parterre with Tulips and other bulbs

A straggly old rose bed at the entrance to this Hampshire house was replaced with some box plants in formal patterns.

This provided a more attractive entrance to the house as the old rose beds were rather featureless and ugly through the winter months and the box gave more structure, body and beauty.

A succession of bulbs including tulips, alliums and agapanthus were planted amongst the box to give further colour and interest throughout the seasons.

For this Hampshire orchard, a lovely selection of plums, pears and apples were planted on the boundary of this rural property to give wonderful spring blossoms and fruits in different months.

The trees were selected with rootstocks that were not too large-growing so that they would be happy in their space.

It was important to apply proper formative pruning, especially in the first few years so that the trees developed good shapes.

If you'd like to discuss a project, please call me on the number below.